Welcome to the Third post in the Seven Forms of Lightsaber Combat series. In this section, we go over Ataru. Please refer to the Shii Cho, Makashi, and Soresu posts if you wish to read them in order. This is not meant as a technical manual, merely a guidepost for developing the Forms however you see fit. Whether Martial, Creative, Sport or just for fun, I hope this helps.

The fourth form of lightsaber combat is known as Ataru, the Aggression Form. It is also known as the Way of the Hawk-Bat, a repitile-avian hybrid that lived primarily in urban settings. The Hawk-bat was known to viciously swoop down on its opponent, overwhelming them until they succumbed. This aggressive bombardment from on high is key to understanding Ataru.

In Star Wars history, Ataru was developed roughly around the same time as Soresu. Both 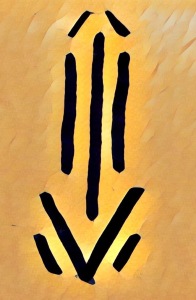 forms were answers to the Jedi evolving in to a peace keeping force. While some preferred the defensive, others felt that some situations called for aggressive negotiations.

As a twin to Soresu, Ataru bore several similarities. It was non-linear in its footwork, allowing for movement and action in multiple directions. Both are also oriented around the purpose of draining the physical resources of the opponent. Where they change however is in approach. Where Soresu believed that defense was the best offense, Ataru believes that offense is the best defense.

Where Form III is very much centered on the user, All attacks are coming to them and they respond, Form IV reverses that. The focus is now on the opponent. By constantly attacking, they force the opponent to respond, defending until they make that one mistake. Ataru is a machine gun barrage. The first shot may not find its mark, nor the second. But after a while, the opponent may find themselves walking straight in to the final strike.

What makes Ataru distinct from the other offensive forms is its focus on continuity. The strikes and movements are all seemingly connected. There is a sense of rhythm, of one movement flowing in to the other. It also takes in to account the opponent in all angles. When fighting an Ataru user you must be prepared to defend from all sides.

The ideal situation for an ataru user would be in a moderately contained space. It would be someplace where the Ataru user could have access of movement while also penning in their opponent(s). Ataru could be used against multiple opponents, but it works best against a single opponent to focus that barrage on. When fighting someone who deals in Ataru, the best advice is to use similar tactics as one would use with Shii Cho: do not let them gain momentum. Keep them penned in, constantly having to reorient themselves. Do not let them get the uppherhand, becuase once they do they will run with it.

Those who are fans of Ataru will note that I don’t use the word most associated with it: Acrobatic. Ataru is known to be one of the more visually impressive of the Forms, and most sources label the core cast of the prequel movies of either being users or trained by those users. The most infamous of these is Yoda, in all of his CGI glory. Allowing for some dynamic movements to take the opponent off guard. However, a lot of people in the saber community tend to assume that just because you are acrobatic while using your lightsaber, that you’re doing Ataru. This is not true.

The other primary user of Ataru was Qui-Gon Jinn, all six-foot-four-inches of Liam Neeson. He’s not as fast or flippy as a computer generated muppet, yet most people focus and assume that Ataru requires you to do a backflip in order to proceed. It is better to say that it should promote the technique if the user feels it possible. Some may be more inclined towards flips and high acrobatics, some may be more inclined to keep their feet on the ground.

When researching martial arts, I often find myself looking to the various schools of chinese martials arts. Look at the various styles of kung fu and wushu, look at the body movements. There is a lot of movement, a lot going on. Also look at each move and how it transitions in to the next. Whole demonstrations flow one in to the other with each other. As such, the chinese straight sword makes an excellent analogue.

Another martial art to research is Capoeira. Originally from Brazil, Capoeira was originally developed by native workers utilizing dance as a means of camouflaging training from their overseers. The style utilizes the whole body, often using the momentum accumulated for damaging results. Several years ago there was a show called Fight Science, in which they analyzed various martial arts scientifically to dispel some of the rumors. In one episode they focused on the kicks of Karate, Tae Kwon Do and Capoeira. Of the three, Capoeira was found to be more damaging because of the built up momentum and use of maximal body weight on the strike. It is a beautiful and graceful form, that once caught in places you in a vortex of attacks. (Edit: found it here)

Finally, to further emphasize the focus on continuity, I suggest researching the practice of Parkour. Parkour, or free running, allows for acrobatic feats while utilizing the entire body to flow. It studies body mechanics in such a way that it transitions from one state to the other while never letting go of its momentum. Some Parkour users are much more acrobatic than others, while some keep to the basics to give them an edge and a sense of balance. Parkour treats obstacles as opportunities, and this is an attitude that any Ataru user should appreciate.

Ataru values, above all, offense. As such, it does not adhere to the traditional defensive mindsets. Its defensive priorities would be to intercept the oncoming attack with an attack of its own. It would also teach its user to use the time honored method of not being around to get hit. This is one of the reasons why I like Capoeira and Parkour for training in Ataru. The body mechanics used in both allow for unique offensive and defensive possibilities.

The connection to Soresu leads to a question that should be thought of when researching the Forms. Who would win in a fight, a Soresu master or an Ataru master? If both were at their peak performance and given a space where they can use their physical and tactical skills. The stalwart defender against the oncoming barrage. A lot of people try to focus on which Forms can beat the others with Soresu and Ataru, with their advantages and disadvantages evenly matched, it comes down to the skill of the user as really is. In the end, it would come down to who blinks first. The first fighter that wasn’t fast enough, or smart enough, or strong enough to make it another step.

Ataru is a devastating Form that tests the patience and resolve of those it faces against. Behind the flash is a deceptively destructive force that could see many opponents fall beneath its barrage.

The next post will focus on the twin aspects of Form V: Shien and Djem So. Comments are always welcome, as are suggestions about future posts. If you enjoy what you see, please consider following this blog.