As we continue on, I think now is a good time to stop and answer a question. It’s a question that hopefully some of us have asked and I have to believe a lot of people outside our community have asked before:

Why learn about lightsabers?

This is a fair question, and one that I think is the healthiest thing to ask in this community. Let’s be real for a second, we are all of us geeks playing around with an expensive light up toy. Martial Arts, Stage and Screen, doesn’t matter, it’s a toy and we’re all geeks.  So why are we doing this and not something more constructive? This is a question everyone needs to ask.

The novelty factor is definitely there. I know for damn sure that this isn’t something one normally does, even in New York City. There is that moment of going “huh, well that’s interesting” and moving towards it. Some of us call it “the bug zapper effect”, because the saber glow brings people to us. But that alone doesn’t hold people to do this. I can buy five or six or seven kendo sticks with the same amount of money it costs for the most basic combat-ready lightsaber and do the exact same thing. So what is it that keeps us here?

I have a theory. The Star Wars Saga is the telling of a story we’ve all heard before but in a way we’d never seen before. It’s a story of heroes coming in to their heroism in a galaxy so broad that we get the feeling that even this is merely on in a billion different tales. It’s a story told through the filters of styles and genres before it, from cowboys and bounty hunters in the arrid wastes; to trench runs by daring pilots; to the tale of honorable warriors in a world without honor. We’ve seen these before, and they all exist here in different ways.

This story is known as The Monomyth, a framework of common themes which scholar Joseph Campbell suggested permeated throughout culture and history and has appeared throughout the world without transmission. It appears because it always has appeared, as a means of inspiration and of translation of ideals across the world as what defines a “hero”. It’s Arthur finding Excalibur and becoming King, it’s Frodo’s journey and back to destroy the Ring, it’s Siegfried’s ride to the rescue, Dorothy’s travels through OZ. Luke and his quest to defeat the Empire. These stories follow a series of events that occur throughout legends the world around.

George Lucas was very much aware of Joseph Campbell, the two even became friends and colleagues as Return of the Jedi premiered. Lucas would go on to say that the modern era lacks a mythology people could hold on to. There were no knights or cowboys. Star Wars filled the void that inspired adventure in those who saw it. Now there were Jedi and Smugglers, Space Princesses who took command and could hold her own. You had Villains and Rogues that inspired fear (and for some, to emulate). Whether Lucas intended to, Star Wars became part of the new mythology for the past forty years.

But people, as a rule, aren’t content with just seeing or reading something. They need to feel it, experience it. We’ve all played make-believe, and for the past forty years there have been children of all ages who have picked up sticks and mocked combat with one another while humming the signature sound of the lightsaber. It began with one being Vader, and the other being Luke. But pretending to be the characters wasn’t enough, they needed to be in it.

There were two ways of doing that. The first is to insert yourself into the setting,  which unless you somehow have an in with the movie writers, is regulated to most fan-fictions and productions. The other option is to take what we’ve seen and read from the setting and bring it out into the real world.

That’s where we come in.

New York Jedi, the first of the lightsaber groups, called the process Hero Building. You build a character set in the Star Wars Galaxy (or the closest approximation without a lawsuit) and you learn to draw that character out in the real world through lightsaber combat. By using the character as the bridge, we can take part in what makes Star Wars special. What makes it better is that groups like NYJ go out and perform for others.

That drive to connect to the Star Wars Mythos, and more importantly to share that connection, is at the heart of this community. By learning and critically 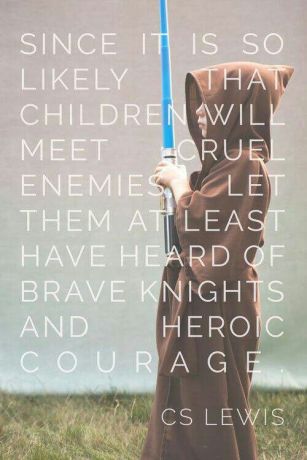 interpreting what we’ve read and watched, we can develop ourselves/our characters better. By trying to bring about how the Jedi would have employed their lightsaber skills, we’re able to convey as much accuracy on stage.

I think that it should be clear that this practice was originally meant for entertainment purposes. The goal is not, inherently, this ritual in to embodying a mythos or somehow drawing some sort of insight in to oneself.  It’s certainly a possibility and a benefit, but the goal has always been to delve in to the magic and share with others.

Of course, this is a broad statement. It doesn’t effect everyone on the same degree. I know quite a few martial artists who look at the lightsaber as an interesting thought experiment on how to take what they know and covert it to a weapon that has no edge and where a single touch means the loss of limb or life. For them it’s mechanical, but the inspiration of moving from fictional to reality has a hold on them.

Several months ago, someone had published a book on “lightsaber sword combat”. It was a passable Fiore Longsword manual, but it stripped out everything that made the lightsaber unique. The author felt that developing a martial style on a fictional weapon as depicted in the movie was ‘impossible’. On this we agree, but their method was to strip out what makes an item like the lightsaber unique. Without having a care for the weapon in the spirit with which it was intended, not necessarily in the mechanics that make it real, we are all just become people waving glowing sticks who are better off just learning this crap with shinai or traditional methods. It costs less in the long run.

I say screw that. I want people to look at our works and go “Holy crap, these guys are Jedi.” If we can do that, no matter how, for even a second, then I think we’ve done our job. Otherwise what is the point? We’re running around with giant glowsticks, let’s be Jedi.

Writer’s Notes: If you have a different perspective on the matter, please share here or where posted. I am interested in peoples reasons and motivations and do not proscribe my beliefs on everyone who picks up a glowstick. So leave a comment or message and I may do a follow up.

One thought on “Why We Do This”